Rabies is a neurotropic disease caused by rabies virus which belongs to family Rhabdoviridae. It is spread in more than 150 countries and territories of all continents except Antarctica and cause death of more than 50,000 human lives worldwide annually. Awareness of people about the disease and appropriate treatment can only reduce the mortality rate in this oldest known mankin..
Rabies: A Neurotropic Disease
Authors: DR. ANKIT SINGH1, BHUPENDRA SINH PANWAR1, DR. NEETU SINGH2, CHET RAM1
1NATIONAL RESEARCH CENTRE ON PLANT BIOTECHNOLOGY, NEW DELHI
2ADVANCED INSTRUMENTATION RESEARCH FACILITY, J. N. U. , NEW DELHI

Rabies is one of the oldest known diseases of mankind. Rabies in India is known since Vedic period as corroborated in Atherva Veda. The word, “rabies” comes from the Sanskrit word “rabbahs” which means, "to do violence". Yama, the God of Death in Hindu mythology, has been shown to be attended by dogs as his constant companions and as emissaries of death (Ahuja et al., 1983). The first description of the disease dates from the 23rd century BC in the Mesopotamian Laws of Eshnuma (Fu, 1997), yet it has been only slightly more than 120 years (1885) since Pasteur developed the first vaccine for post-exposure treatment. Since this first crude nerve tissue vaccine, numerous other vaccines for human use have been developed. These are used with varying degrees of effectiveness and safety but we are still facing an epidemic situation of rabies today. In spite of numerous efforts 35,000-50,000 human fatal cases per year are reported (WHO, 1994). Actual numbers may be much higher. This makes rabies as one of the most mortal infectious diseases and even today is regarded as one of the most terrifying diseases in the world. Despite the early discovery of the rabies vaccine, this disease is still a problem today. Moreover, the new and effective vaccines are often unaffordable for the average citizen.

Rabies viruses form following two types of association with their host species
(i) The virus establishes a stable infection cycle within a particular mammalian species, most notably observed in carnivorous mammals (dogs, foxes, raccoons, and skunks) as well as in a variety of bat species. Whether the virus always causes disease in these is not clear; although fatal rabies is common in infected dogs, foxes and raccoons; the same does not always appear to be true for bats (Baer and Lentz, 1991). 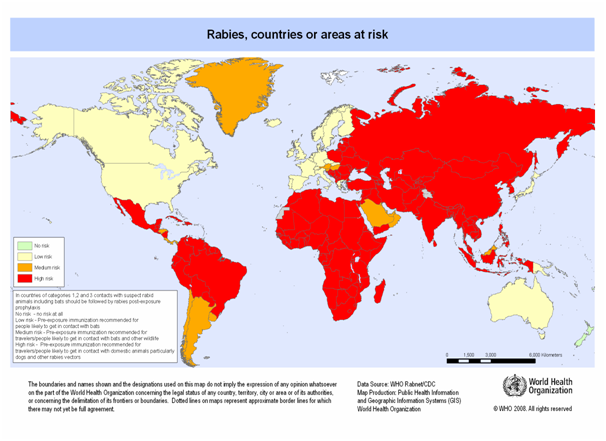 (ii) The second form of virus-host interaction occurs when the virus jumps species boundaries to infect new hosts. The example of these “spill-over” infections is human rabies. However, occasionally rabies viruses are able to establish productive infections in new host species (Tordo et al., 1993; Nadin Davis et al., 1994). An important example of such a successful host switch involved the transfer of the virus from dogs to the red fox (Vulpes vulpes) in Northeast Europe during 1930s (Bourhy et al., 1999) and was able to spread rapidly westward and southward through European Red fox populations in the subsequent 60 years (Bourhy et al., 1999).

Rabies virus is a strict neuropathogen in vivo, and yet it has a wide host range in vitro, infecting nearly all mammalian and avian cell types (Wunner et al., 1984). Neurotropic is a major feature associated with rabies virus infection that is viral replication restricted almost exclusively to neuronal tissue (Murphy et al., 1973), but it causes no cytopathic effect in cell culture (Crick and King, 1988). In vivo, nicotinic acetylcholine receptor has been suggested to be rabies virus receptor (Lentz et al., 1982). Other studies showed that the problem is probably more complex, suggesting the existence of at least two receptors at the surface of nerve cells (Lafay et al., 1991). In vitro, gangliosides via their sialic acid or phospholipids play the role of receptors (Superti et al., 1984a; 1984b; 1986; Wunner et al., 1984). Rabies virus has also been found to cause fusion of cells and hemolysis of erythrocytes under acidic conditions (Mifune et al., 1982). The pathogenicity of rabies virus strains depends on the presence of antigenic determinants on the viral glycoprotein. Arginine at 333 positions in glycoprotein is essential for the integrity of an antigenic determinant and for the ability of rabies viruses to produce lethal infection and pathogenicity in adult mice (Dietzschold et al., 1983b). Rabies virus moves in a time dependent manner through the central nervous system of infected animals. The virus reaches the spinal cord by centripetal spread (axoplasmic flow of 12 to 24 mm per day) and subsequently transported within hours to the brainstem (Murphy et al., 1973).

The rabies virus is belongs to the Lyssavirus genus, in the family Rhabdoviridae. The negatively single strand RNA genome of the virus encodes five genes in conserved order: nucleoprotein (N), phosphoprotein (P), matrix protein (M), glycoprotein (G), and the viral RNA polymerase (L). Rabies virions are bullet shaped with 10 nm spike like glycoprotein peplomers covering the surface. The ribonucleoprotein is composed of RNA encased in nucleoprotein, phosphoprotein and polymerase. Rabies glycoprotein (G-protein) of rabies virus has been identified as the major subunit antigen that induces protective immunity among the five major proteins encoded by viral genome

The first rabies vaccine consisted of phenol or heat-inactivated viruses produced from subcutaneous inoculation of spinal cord suspension, derived from rabid rabbits. In spite of often severe side effects that contribute to the burden of rabies on public health, these vaccines are still used in developing countries since they are easy to prepare and less expensive than the more recent generations of vaccines (Meslin et al., 1994). The following types of vaccines have been developed in recent years: purified duck embryo cell vaccine (PDEV), dog kidney cell vaccines, purified chicken embryo cell vaccine (PCEC) and vero cell vaccine (Sureau, 1992). In some countries these vaccines were replaced by recombinant vaccinia virus expressing rabies glycoprotein (G-Vacc) (Brochier et al., 1990). Within the veterinary field, the oral vaccination of wildlife together with domestic dogs, has led to a significant reduction of rabies incidences (Winkler and Bogel, 1992). Animals immunized with subunit vaccines based on the rabies virus G protein are protected against a challenge with rabies virus administered peripherally or directly into the central nervous system (Wiktor et al., 1984). Rabies glycoprotein is effective as a subunit vaccine (Kieny et al., 1984) provided that it is glycosylated (Yelverton et al., 1983; Lathe et al., 1984).

The veterinary use of rabies vaccines is limited to preventive measures, whereas vaccination of human takes place mainly after exposure to a rabid animal. Different regimens of vaccination are recommended (WHO, 1996) which varying in number and sites (muscle or skin) for injections. In the case of severe exposure, vaccination is often accompanied by injection of human rabies immunoglobulin (HRIG). However, due to non-availability and high costs, the HRIG is often replaced by equine immunoglobulins (ERIG). In the future, monoclonal human antibodies might be an alternative source (Schumacher, 1989). Serum can only be used in addition to vaccination. On its own, it does not protect against rabies (Sikes et al., 1971). A major drawback of immune serum is that it inhibits VNA production after vaccination (Baer et al., 1988). This effect could be partially overcome, if the number of vaccinations was increased or if the vaccination took place at least 15 days after the immunoglobulin treatment, or if serums were administered 12-24h after vaccination (Wiktor et al., 1971).

Lafay F., Coulon P., Astic L., Saucier D., Riche D., Holley A. and Flamand A. (1991) Spread of the CVS strain of rabies virus and of the avirulent mutant AvO1 along the olfactory pathways of the mouse after intranasal inoculation. Virology 183: 320-330.

Tordo N. and Kouknetzoff A. (1993) The rabies virus genome: an overview. Onderstepoort Journal of Veterinary Research 60: 263-269.

About Author / Additional Info:
I did my Ph.D. from National Botanical Research Institute (NBRI), Lucknow. My Ph.D. work was focused on oral rabies vaccine alternatives. Currently, I am working on genomics and phenomics approaches for drought tolerance rice at National Research Centre on Plant Biotechnology, New Delhi.