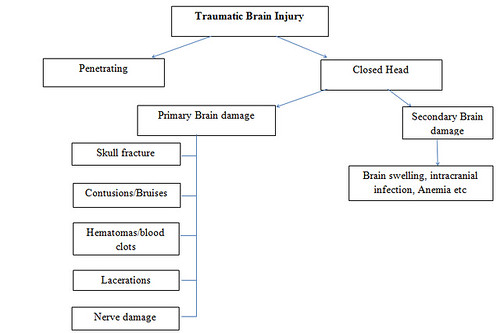 1. 10% of the people all over the world die due to trauma and the estimated deaths due to road traffic accidents are seen to shoot up by 83% in the years ranging from 2000 to 2020.

2. In India, 1 million of the entire population succumbs to trauma death every year.

4. The frequency of the Indian population suffering head injuries is the highest the world over [4].

1. Mild TBI and Art therapy: When an individual is injured and has a momentary loss of consciousness with being dazed and confused, the phenomena is known as mild TBI or a concussion. This may result in headaches, dizziness, fatigue etc which is labeled as the "post-concussion syndrome". The main reason for therapeutic use of arts is to bring down the frequency of intrusive memories and avoidance reactions and to enable the affected individual in being self-efficient. As an individual feels fatigued due to trauma, regarding his executive functions it is advised that lower parts of the brain be taken care of primarily. When TBI causes frontal lobe changes, art therapy aids in skills such as problem solving, memory etc [5].

2. Stem cell combination therapy: Many pre-clinical trials by researchers at University of South Florida (Department of Neurosurgery) incorporated a mix of human umbilical cord blood cells (hUBCs) and granulocyte colony stimulating factor (G-CSF) in rats that suffered from TBI. It was found that their combined action was more effective than when given alone. Chronic TBI is more dangerous as the neuronal cells of the CNS die due to chronic neuroinflammation preventing the natural repair mechanism. Therapies from future preclinical studies must take into account the cognitive as well as motor improvements, in animals made use of in such experiments [6].

3. Hyperbaric Oxygen Therapy: Hyperbaric Oxygen Therapy (HBOT) is used to deliver higher amounts of oxygen to the already injured tissues. This process is carried out by raising the partial pressure of oxygen (pO2) in the blood. Also, plasma bound oxygen is easily taken up by the tissues to deliver oxygen if RBCs are not present. This process brings down the brain vasogenic edema that results in lowering of the intracranial pressure (ICP). A low point in HBOT for TBI is that few studies have been carried out clinically [7].

4. Hormone (progesterone) therapy: A clinical trial to treat moderate to severe traumatic brain injury is being carried out by BHR Pharma- BHR 100, a neuroprotective agent/drug is being used in this study. The trial outcome would be available in May 2014; 1200 patients suffering from TBI were administered a 5-days continuous IV infusion of progesterone within 8 hours of being injured. The objective of this trial is to see a higher Glasgow Outcome Scale after 6 months of injury. The U.S. and EU regulators have given an â€˜orphan drugâ€™ status to BHR 100 [8].

5. Portable Neuromodulation Stimulator (PoNS) therapy: As the human tongue is an electrical stimulation hotbed, it gives us the platform to treat diseases such as combat-induced brain injuries. The whole set-up developed by Tactile Communication and Neurorehabilitation Laboratory (University of Wisconsin-Madison) consists of 2 parts: a pattern of electrodes placed on the tongue and a control box. The patient is administered half-an-hour of stimulation therapy (cranial nerve non-invasive neuromodulation) along with physical, occupational exercises etc. A particular exercise is related to specific tongue stimulation patterns which lead to new neural pathways being formed by the brain. This innovative therapy is long-lasting i.e. the neural pathways are self-sufficient in their activity even in the absence of the stimulation process. This has even caught the attention of the U.S. Army Medical Research and Materiel Command (USAMRMC) which aims to bring back the lost physical and mental functions of the TBI patients [9].

6. Ketamine therapy: A preclinical study carried out at the UC Neuroscience Institute has exhibited that administration of ketamine (an anesthetic) stops a form of damaging electrical activity known as brain tsunamis. Ketamine regulates the amount of glutamine in the brain cells and prevents them from being subjected to excitotoxicity. One of the advantages of reducing the amount of glutamate is that the damage to the brain also slows down following TBI; human trials are yet to start- funding would be done by the U.S. Department of Defense. This would be a landmark study and selectively inclusive in nature as ketamine would be administered to only those patients who experience brain tsunamis [10].

7. Coma Arousal therapy: This therapy consists of kinesthetic, auditory, tactile and visual stimulation methods. Research was done in 30 comatose patients to check if any improvements were seen in the scores of Glasgow Coma Scale (GCS) and Coma Recovery Scale (CRS). The outcome of the trial was that inclusion of coma arousal therapy in the specified treatment regimen for 2 weeks increased consciousness recovery in TBI patients. As frequent and varied sensory stimulations were given, dendritic growth and synaptic connectivity took a turn for the better in patients having a damaged nervous system [11].