Salmonellosis is one of the major foodborne illness in poultry industry. It is affecting the industry every year and causing a lot of loss to the farmers. Recent management approaches are very useful for its control...
SALMONELLOSIS IN POULTRY BIRDS
Authors: Lamella Ojha, Abhishek Kumar Singh, Srobana Sarkar, Deepika Tripathi, Hujaz Tariq, Amit Sharma
PhD Scholar-National Dairy Research Institute, Karnal


Foodborne illness continues to be a significant worldwide health problem in poltry birds. Salmonellosis is one of the major foodborne illness in poultry industry. Salmonellas are gram negative Enterobacteria and in poultry exclusively two serotypes are recognised to produce clinical Salmonellosis: S. gallinarum (S.g) and S. pullorum (S.p), (named “Fowl Typhoid” and “Pullorum Disease” respectively). Other serotypes like paratyphoid may infect or contaminate flocks without causing disease symptoms. However, these Salmonella’s may contaminate poultry products provoking food poisoning in human beings. Due to Salmonella infecton morbidity is around 0-90% and mortality is usually low.

The route of infection is vertical as well as horizontal type. The horizontal transmission of typhoid group between birds occurs by direct contact from infected to susceptible birds, or vertically by eggs. Several members of the paratyphoid group adapt well to birds and may invade and colonise in organs without causing disease or disorders. Some serotypes usually use the transovarial route (vertical) and produce offspring that is infected as of day one with the serotype prevalent in the breeder hen. Other serotypes are less invasive and persist in the digestive tract. They usually enter a flock through mechanical means (fomites, feed, pests and vehicles) or breaking the on-farm biosecurity barriers. 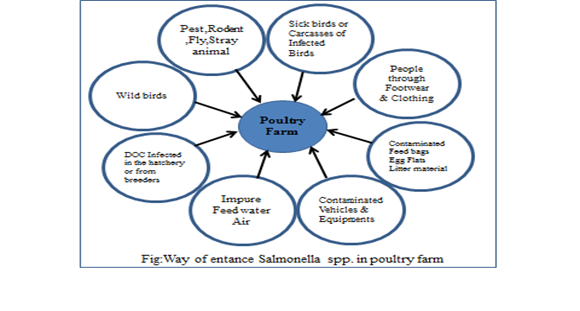 Antibiotics are mainly used for the treatment of salmonella infections. The generally used antibiotics are sulphonamides, neomycin, tetracycline, amoxicillin, fluoroquinolones. Good management and chemotherapy can prolong carrier status in some circumstances.

Poutry farm workers are the key factor in an effective Salmonella control program. They must all know and meet all biosecurity standards established for the farm. They have to obey all rules regarding hygiene in the bathroom, clean hands, clothing and footwear operations and refrain from contact with domestic birds outside working hours.

All buildings and equipment have to be cleaned and disinfected before the entry of a new flock. The enterobacteria counts are below the accepted < 103 cells per 25 cm2.

Feed is an important source of contamination in poultry flocks. Grains, meat meal as well as environmental dust are common sources of feed contamination. Although pelletising feedstuffs will destroy almost all bacteria present in the feed and recontamination may take place in the cooler environment or by dust and insects present in the feed mill. Some time organic acid and/or formaldehyde are should be used in poultry feedstuff for prevention of Salmonella infections.

The hatchery is mainly used for the incubation of eggs, but it is an efficient multiplier and spreader of Salmonellas. This is especially the case when there are positive and negative eggs or chicks inside the hatchery. Cross contamination may then take place through direct contact, dust, handling during sexing and vaccination, and during storage and transportation to the farm.

There are two groups of vaccines: inactivated (bacterins) and attenuated live vaccines. Both are serotype specific, so they have a limited protective effect to the same or Salmonella serotypes within their own group (eg. D group S. enteritidis and S. gallinarum). There are live vaccines for biological control available in the market against S.gallinarum (9R); S.enteritidis (bacterins and live vector or modified strains) and S. typhimurium (killed and live attenuated).

Feed additive like probiotic is becoming more and more popular and proves to be a useful tool in the fight against Salmonella infections. Probiotic organisms are reduced the colonization of opportunistic microorganisms in the gastrointestinal tract by competiting for receptor sites, stimulation of the immune system, and production of some active antimicrobial substances (Higgins et al.,2010).

Besides the use of probiotics, the continued use of prebiotics, organic acids and other substance like chlorite (Byrd et al.,2003) are also being another alternative in a prevention program of Salmonella infections.

Bacteriophages represent a group of viruses that specifically infect and replicate in bacteria and could potentially be used to reduce recovery of Salmonella. Higgins et al. (2005) showed that use of a specific bacteriophage treatment to reduce (P < 0.05) Salmonella in poultry products as compared with controls.

In newly hatched chicks, the rapid establishment of an adult-type intestinal microflora, via the oral route, produces almost immediate resistance to colonization by any food poisoning salmonellas that gain access to the rearing environment. Exploitation of the ‘competitive exclusion’ (CE) or ‘Nurmi Concept’ methods the effect is now an accepted part of the overall strategy by which poultry-associated salmonellas are being controlled in some countries.