Crop Residue Burning - A Threat to the Environment

Burning of agricultural biomass residue, or Crop Residue Burning (CRB) has been identified as a major health hazard. In addition to causing exposure to extremely high levels of Particulate Matter concentration to people in the immediate vicinity, it is also a major regional source of pollution, contributing between 12 and 60 per cent of PM concentrations as per various source a..
Crop Residue Burning - A Potential Threat to the Environment
Author: Dharmendra Meena
Department of agronomy, College of Agriculture, G.B. Pant University of Agriculture & Technology, Pantnagar-263145, U.K., India
Corresponding author email: dm322001@gmail.com

Since its discovery, fire has been used by human being in both positive and negative way. In farming, fire is used to facilitate of land clearing (slash and burn cultivation of upland farming).if not for fire and burning, early farmer could not have transformed, log-over or bush land into productive crop land. The burning of crop residues in fields is one of the most significant activities of global biomass burning (excluding biofuels), and contributes substantially to air pollution. The burning of rice residue emits GHG emissions as carbon dioxide (CO2), methane (CH4), and nitrous oxide (N2O), pollutants as carbon monoxide (CO), particulate matter (PM), and toxic as polycyclic aromatic hydrocarbons (PAHs) due to the incomplete combustion process (Yadav et al, 2014). The emissions of CH4, CO, N2O, and NOx have been estimated to be about 110, 2306, 2 and 84 Gg respectively, from rice and wheat straw burning in India in the year 2000 (Gupta, et. al., 2004). Residue burning is the deliberate setting fire of the straw stubble that remains after wheat and other grains have been harvested. The carbon (C) component in stubbles is lost by burning and that the process of burning stubbles even occasionally, seriously affects the organic carbon levels of the soil. Around 80 per cent of the C in standing stubble will return to the atmosphere as CO2. Losses of carbon as CO2 to the atmosphere through burning are often only slightly greater than through natural decomposition, but they are of course immediate.

Each slice depicts the percentage of farmers that disposed of crop residue in a particular manner. 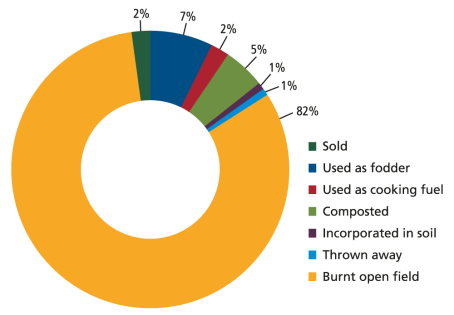 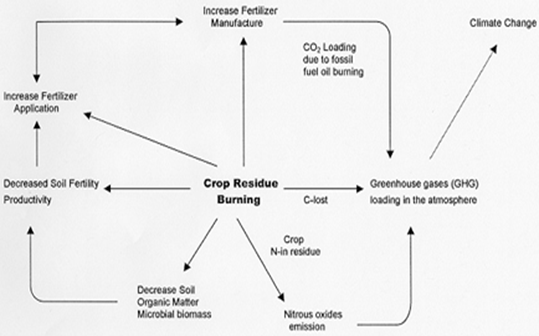