In the history of human civilization, the oilseed Brassicas are one of the earliest domesticated crops as evidenced from their cultivation in Neolithic age. Collection of mustard seeds from the Chanhu-daro of Indus Valley Civilization is a direct evidence of their use nearly 2300-1750 BC1. Oilseed Brassica species, commonly known as rapeseed and mustard, are cultivated in India on over 6.8 m ha during Rabi season (Sept. â€" Oct. to March-April) and production wise India ranks third largest producer of these group of crops in the world. Globally, India account for 21.7 % and 10.7% of the total acreage and production2. Amongst the oilseed crops cultivated in India, rapeseed-mustard constitutes the second most important group after groundnut sharing 27.8% in Indiaâ€™s oilseed economy. The rapeseed-mustard production trends represent fluctuating scenario in India as various biotic and abiotic factors play role in reducing of oilseed yield. The major diseases create serious economic losses to Brassica in India are caused by fungal pathogens, like Alternaria brassicae and A. brassicicola (Alternaria leaf blight), Albugo candida (white rust), Hyaloperonospora brassicae (downy mildew) and Sclerotinia sclerotiorum (Sclerotinia stem rot). Though few virus diseases were reported on these crops from other countries, but no such problem was reported earlier in India.

Over 4,500 accessions of rapeseed-mustard germplasm, comprising of nine different Brassica species and sub-species were grown for characterization and evaluation at National Bureau of Plant Genetic Resources (NBPGR), New Delhi during last three decades. In the Rabi season, 2010-11 an unknown leaf curl type deformity with severe stunted plant growth was observed for the first time in three plants of Brassica species namely Brassica juncea ssp. rugosa, B. rapa var. brown sarson and B. rapa var. yellow sarson. Interestingly during 2011-12, occurrence of the same symptomatic expression had been recorded on 16 plants of seven accessions comprising of four species of Brassica. The symptoms were upward leaf curl, leaf rolling, thickening of veins and stunted growth of plants (fig. 1) which resembles with the symptoms caused by many begomoviruses. The same leaf curl disease was appeared in higher incidence and spread to as many as 62 accessions of rapeseed-mustard during 2012-13 3. The affected plants often showed severe stunting (fig. 2) with fewer branches and lesser number of pods, thus negatively affects the yield. Majority of the accessions belong to B. rapa var. yellow sarson including three check cultivars, namely Pusa Gold, YST 51 and Ragini. Germplasm of Brassica rapa var. yellow sarson, B. rapa var. brown sarson, B. juncea var. rugosa and B. nigra were observed to be susceptible to disease while some related species B. rapa var. toria, B. juncea, B. napus and B. carinata were found to be tolerant under field conditions.

The complete molecular study of the symptomatic leaf samples has revealed highest identity with a weed infecting begomovirus â€" Croton Yellow vein mosaic virus (CYVMV) and a betasatellite molecule (Croton yellow vein mosaic betasatellite)3. Such kind of leaf curl disease caused by geminivirus has not previously been reported to infect rapeseed-mustard crops. But this virus was reported to be present in weeds (Jatropa gossypifolia, Acalypha sp.) and cultivated plant species (cluster bean, radish) in India and Pakistan 4,5,6. Like other begomoviruses, CYVMV is also transmitted by white fly (Bemisia tabaci). The whitefly is one of the most widely distributed vector found in tropical and subtropical agricultural regions of the world, where it affects over 600 different cultivated and wild plant species. Whitefly-transmitted viruses have been accidentally introduced to non-native locations, where they have rapidly established often causing more damage than the endemic viruses.

Present observation constitutes the report of emergence of another weed infecting begomovirus-beta satellite complex in rapeseed-mustard germplasm in India The increasing incidence of leaf curl virus on rapeseed-mustard group of crops is alarming may be a result of global warming. As a result damaging epidemics of viruses transmitted by whitefly, such as begomoviruses that infect many important crops, will increase considerably 7. Another reason may be the recombination of original CYVMV with other begomoviruses and with other CYVMV isolates or it may be due to geographic expansion of virus and vector distribution resulting from increasing temperatures and other climatic factors. This will surely enhances the appearance of â€˜new encountersâ€™ between viral pathogens (and their vectors) and new host plants. This process of bringing more viruses into contact with more potential hosts will provide new opportunities for virus evolution, that will further increase the rate of invasion of indigenous flora by introduced viruses and of introduced plants by indigenous viruses emerging from native plants to infect them8,9. 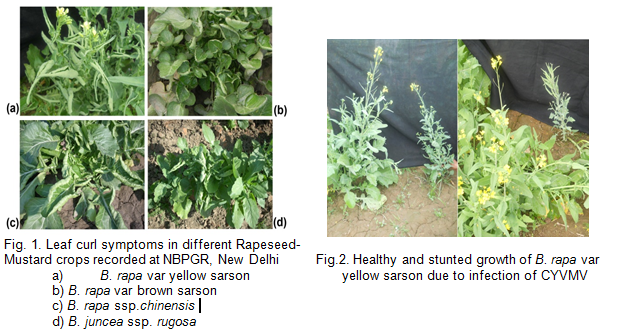