RNA Editing and its Potential Role in Evolution

RNA editing is the post-transcriptional alteration of RNA sequences through insertion, deletion or substitution of nucleotides, excluding the RNA processing events. The gene whose transcript is edited is cryptogene and the addition of several Uracils during the insertion is termed as pan editing. Substitution includes both Cytosine (C) to Uracil (U) and Adenosine (A) to Inosine..
RNA editing and its Potential role in evolution
Author: Waghmare Sandesh Tulshiram
Sandeshwaghmare174@gmail.com


Article Summary: RNA editing is the post-transcriptional alteration of RNA sequences through insertion, deletion or substitution of nucleotides, excluding the RNA processing events. The gene whose transcript is edited is cryptogene and the addition of several Uracils during the insertion is termed as pan editing. Substitution includes both Cytosine (C) to Uracil (U) and Adenosine (A) to Inosine (I), through hydrolytic deamination. RNA editing could be used for genome manipulation in crop plants also.

RNA editing is the post-transcriptional alteration of RNA sequences through insertion, deletion or substitution of nucleotides, excluding the processing events such as G-capping, polyadenylation and splicing. This process is often necessary to generate large number proteins with limited coding genes. RNA editing is a molecular process in which cells can make discrete changes to specific nucleotide sequencewithin a RNA molecule. Changes in nucleotide sequence has generated by RNA Polymerase. RNA editing has been observed intRNA,rRNA, mRNA or miRNA molecules of eukaryotes. RNA editing occurs in the nucleus and cytosol of mammals, as well as mitochondria and plastids of plant cell.

RNA editing provides a suitable platform in which a single gene is able to code a number of proteins. As a result, molecular diversity arise which finally reflect on phenotype and its leads to evolution. Evolution is defined as successive processes that bring changes in organisms to adopt a particular environmental condition. Evolutionary changes occur due to natural selection, mutation and genetic drift.

2.1. Uracil Insertion: This type of RNA editing is commonly observed in mitochondrial transcripts of Kinetoplastid protozoa. In pan editing several uridyl residues are incorporated. This process is guided by a small 3’- oligo-uridylated RNA (Guide RNA) and a set of enzyme complex called editosome. Editosome is also known as 20S enzyme complex. It consists of a series of enzymes which includes, Endonuclease, Terminal Uridyl Transferase (TUTase), 3’- Uridine exonuclease (3’-U-exo), RNA ligase.

Guide RNA is a Small RNA molecules that are encoded by the genes present in the minicircles of mitochondria. Minicircle and maxicircle are two structures present in kinetoplast of mitochondria of Trypanosome; contain both non-coding and coding genes respectively. The guide RNAs are encoded by non- coding genes. The 5’ end contains anchor sequences which are complementary to target RNAs and 3’ end have a ten numbers of uridyl residues. Guide RNAs hybridized with the target RNA and it recruits the editosome.

i) Hybridization of guide RNA with target RNA

i) Hybridization of guide RNA with target RNA

2.3. Cytosine insertion: This type of RNA editing was first observed in a slime mold Physarium polycephalum. Cytosine is incorporated in pre-mRNA which overcomes the frame shift after every 25 nucleotides. 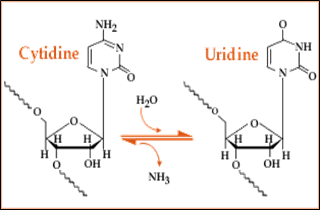 Fig. 5: Hydrolytic deamination of Cytosine where NH2 reacts with water, ammonia is released and finally Uracil is produced .

Adenosine to Inosine substitution is reported in mammals but no such report is observed in plants. It is reported only in nuclear encoded RNAs. The multi-domain enzymes ADARs (Adenosine Deaminases Acting on RNAs) are involved in hydrolytic deamination of Adenosine which converts it to Inosine. The ADARs are classified in to three types based on the RNA they are acting and also presence and absence of functional domains.

ADARs contain a highly conserved catalytic deaminase domain (DM) at their C-terminal Crystallography structure of the DM showed that the surface of this domain contains a positively-charged cleft for the binding of negatively-charged dsRNA and that it catalyses the hydrolytic deamination of Adenosine via a catalytic zinc ion. Moreover, an inositol hexakisphosphate (IP6) was found buried within the enzyme core that contributes to the protein fold. A nucleotide “flip-out” mechanism is necessary to force the targeted Adenosine into the catalytic pocket in the correct orientation for the deamination reaction.

The ADAR enzymes contain a C-terminal conserved catalytic deaminase domain (DM), two or three dsRBDs in the N-terminal portion. ADAR1 full-length protein also contains a N-terminal Zα domain with a nuclear export signal (NES) and a Zβ domain, while ADAR3 has a R-domain. A nuclear localization signal is also indicated.

PPR motif is a highly degenerate unit, consisting of 35 amino acids that usually appear as tandem repeats in a protein. The authentic PPR proteins are classified into the P subfamily, in which PPR repeats are relatively highly conserved. Except for the tandem array of PPR motifs and an N-terminal target signal to plastids or mitochondria, members of the P subfamily usually do not contain any other conserved motifs. In contrast, members of the PLS subfamily contain motifs related to a PPR motif, the PPR-like S (for short) and PPR-like L (for long), which are more variable in size and sequence than the PPR motif itself.

MORFs are proteins; provide additional components of RNA editing machinery in both plant organelles. Two MORF proteins are required for editing in plastids and at least two are essentials for editing in mitochondria. The loss of a MORF protein abolishes or lowers editing at multiple sites, many of which are addressed individually by PPR proteins. The morf gene belongs to a small family of nine genes and one potential pseudogenes. Of the encoded proteins MORF 2 and 9 are reported to be essential for chloroplast RNA editing and remaining MORF 3-8 are for editing of mitochondrial transcripts.

Retrotransposons are the transposable elements which require and RNA intermediate for their transformation from one region to another region of same or different chromosome. Here Adenosine to Inosine RNA editing is observed. It is reported that the due to A to I editing for a period of time the intronic segments are converted into exonic segments and the process is called exonization. This is a mechanism which generates phenotypic diversity and also ability to create new function.

RNA editing could be used for genome manipulation in crop plants also. RNA editing has role in regulation of genes for chlorophyll biosynthesis, fertility restoration and enhancement of plant immunity

Conclusion:
As RNA editing is a natural process it helps a particular gene to express in a various way by generating novel Open Reading Frames (ORFs), its change the function of a particular cell when require. RNA editing could be used for genome manipulation in crop plants also. The role of RNA editing in regulation of genes for chlorophyll biosynthesis fertility restoration and enhancement of plant immunity are well understood.

About Author / Additional Info:
I am currently working as Assistant professor at K.K. Wagh College of Agricultural Biotechnology, Nashik