Nanotechnology: A set of tools can make Environment Favourable

Nanotechnology can deal with challenges faced by environment. I have briefly touched few aspects in which practical results are taken and can excel in future.The basic few ecofriendly strategies are discussed like immobilization of single or multi metals, experiment for development of barley seeds etc that can play part in site remediations of marine soil etc ecosystems base..
Nanotechnology: A set of tools can make Environment Favourable
Author: Khadija Pervaiz

Nanotechnology deals the objects or materials sized between 1 to 100 nm. In this review article the specific nanotechnologies will be discussed focus on making environment clean in these categories:-
Ø Site remediation along with waste water treatment.
Ø Ecosafety in marine surroundings.
Ø Settlememnt for bioremediation.
Ø Single or multi metal-contaminated soil.

The assessments to approach such categories will include:
Ø Immobilization of metals through different nanoscale zero-valent iron (nZVI) .
Ø conventional wastewater treatment technologies.
Ø Development of Barley plants for As polluted soil.

Remediation of Metals and immobilization by nZVI

Metal(loid) contamination is a widespread problem and is the major contaminant in European soils caused by anthropogenic activities.[1]. The effectiveness of single- and multi-metal(loid) immobilization of As, Cd, Cr, Pb and Zn using different amounts of nanoscale zero-valent iron (nZVI) was estimated and compared in two different soils, a calcareous and an acidic one. The effectiveness of nZVI to immobilize metal(loid)s in soil strongly depended on the metal characteristics, soil properties, dose of nZVI and presence of other metal(loid)s. In the case of single contamination, this nanoremediation strategy was effective for all of the metal(loid)s studied except for Cd.nZVI are used almost in all experiments for metal remediation at nano scale. The Fe content is 14–18%,and 2–6% are iron oxides. Regarding the phys-ical and chemical information the pH of the nZVI suspension is strongly alkaline (12.2 ± 0.1).

As we know water containing single or multi metals are serious concerns of these days. Metals have the Reducing capabilities of metallic substances, such as zero-valent iron (ZVI), examined for their ability to treat a wide range of contaminants in hazardous wastewater. Nanoscale Zero Valent Iron (nZVI) are the most basic form of the nano iron technology as they are versatile. <


Strategies for Marine ecosafety and ENMs

The widespread use of engineered nanomaterials (ENMs) in a number of technologies and consumer products causes their release into aquatic environments and final deposition into the oceans. It harms aquatic life directly. Nanomaterials have a lot of physiochemical chracteristics for water purification. They include remediation also.

The University of California Center for Environmental Implications of Nanotechnology (UC CEIN) and the Marine Focus Group in the framework of Hazard Working Group of the NanoSafety, focused their mission on studying the impacts of ENMs on the marine environment. The UC CEIN was established in 2008 with funding from the U.S. National Science Foundation and the U.S. Environmental Protection Agency, with the aim of studying the impact of nanotechnology on the environment, including the identification of hazard and exposure scenarios that take into consideration the novel physicochemical properties of ENMs for environmental applications.

Smart Nanoparticles for Sea Water Remediation are considered. Research interest is because nanomaterials have a number of physicochemical properties that make them particularly attractive for water purification and environmental remediation. Their aptitude to be dispersed in water allows them to travel farther than larger, macrosized particles, thus achieving wider dissemination and sanctioning the whole volume to be quickly scanned with a relatively small amount of material.[2].

These unique properties are applied to degrade pollutants .Nanoremediation meets different types of pollution with specific directed technologies, which are used in a stepwise strategy. E.g. 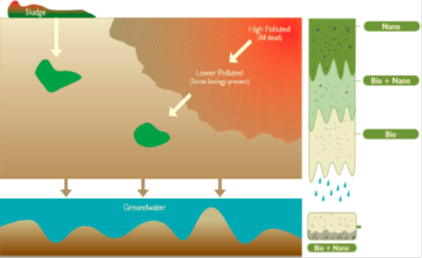 (i) Cleaning very polluted sites toward less polluted soil, after which biota may be able to Remediate pollutants further.

(ii) Cleaning less polluted sites with existing microbiota by developing synergies between the NPs and the involved biota to increase the potential for natural attenuation.

Marine pollution by petroleum products (i.e., oil spills) often produces harmful effects, affecting both the environment and socioeconomic development. In this context, the use of ENMs for in situ remediation represents a promising solution, by ensuring a quick and efficient removal of pollutants.Developing safe and effective remediation technologies for petroleum products based on the design and synthesis of new ecofriendly ENMs. And it might be a challenging solution for promoting in situ nanoremediation for the marine environment.

Nanotechnology sets environment for bioremediation:
Very polluted areas, where all signs of life have disappeared, and therefore preventing the option of bioremediation, are a big challenge for remediation and a wonderful opportunity to test the reactivity. In such cases, NPs are necessary so they can catalyze the initial chemical breakdown and then slowly release the contaminants in order to achieve a level of contamination where microbial processes can take place, enhancing the sequential interaction of nanotechnology and bioremediation.

Ideally, the ENM would degrade into harmless substances at end. In addition,while cleaning very polluted water into less polluted water is feasible, cleaning low pollution levels in water to safe water (especially in the case of microcontaminants) is also a challenge that could be overcome by nanoremediation. However, the fundamental nature of the inorganic NPs may also cause damage to the environment if spreaded uncontrollably.

Nanotechnology ; a strategic source for recovery of As polluted soil: Development of Barley plants :-

Arsenic can have anthropogenic sources such as mining, burning of coaland from pesticides used in agriculture.The present investigation is about over the impact of the nanoremediation treatment on soil recovery that is evaluated by the development of barley plants.

Barley plants were cultivated in treated and untreated soils in a growth chamber. And the As, Fe, and nutrients uptake were calculated. Soil from a former mining-industrial site located in Spain, As pollution was a result of mine ralurgy and metallurgy processes. These activities were carried out intermittently for decades until the end of the 1970s . Bulk soil samples were taken from the surface layer (0e30 cm depth), air dried and sieved (<2 mm) to investigate.

Soil and Barley Plant were treated with nZVI (1%) and n ZVI (10%) to see the nanoremediative chracters of nZVI.Three composite samples were analyzed in duplicate. The physicochemical soil properties were analyzed according to the Table 3.


Impact on barley plants:- A technical experiment in a growth chamber under suitable conditions was performed. Plastic pots (0.3 L) were filled with fine gravel (70 g) at the bottom and 130 g of soil. Seeds of Barley were germinated on filter papers in a Petri dish moistened with distilled water. The Petri dishes were strongly closed with Parafilm and then incubated at 25 °C in the dark. After 72 h, uniform seedlings were transplanted into each pot (two seedlings per pot). The pots were kept in a growth chamber at controlled conditions. 16 h light (22 °C and 40% relative humidity), and 8 h darkness (9 °C and 80% relative humidity) was maintained. The pots were watered during the experiment. Plant height was measured periodically. The plants were harvested 33 days after transplanting. The roots were rinsed, firstly, with tap water , secondly, with distilled water. [3]

The roots and shoots were then dried at 65°C for 72 h to constant weight. The dried material was manually ground prior to the digestion .Briefly, dried plant material was digested in a 4 mL glass vial with a mixture of HNO3 and HClO4 overnight at room temperature, and then at 130 °C in a Techne Dri-Block DB-3D (Camlab,Cambridge, UK) for 2.5 h. After the vials were cooled, the solutions were filtered and diluted to 10 mL with water.

The As concentration was measured by graphite furnace atomic absorption spectrometry.Soil samples taken from the pots after harvest of the plants were homogenized, air-dried and analyzed according to TCLP test (Toxicity characteristics leaching procedure) to evaluate the potential mobility and availability of As in the soil samples. Iron fractionation and leachability were also measured to determine the impact of this nanoremediation process on Fe availability in soil . [4] .

Arsenic was mainly associated to RS and OX fractions; other authors have concluded that the As behavior appears to be controlled mostly by ion binding to iron/manganese oxides hydroxides.The treatment with nZVI significantly reduced the As concentration in the EX fraction. Whereas a significant increase of As in the RS fraction was observed. [5].The dose of 10% nZVI was the most effective, and got a reduction of As in the more available fractions, The development of the barley plants grown in nZVI-treated soils was monitored for 33 days. Plants from 10%-nZVI-soils had the highest growing rate, significantly higher than plants from 1%- treated and control soils. The height of the plants from 1%-treated soils was slightly higher than the height of plants from untreated soils. The present study demonstrates the effectiveness of the nZVI to reduce the As availability in a brownfield soil highly contaminated with As. The best immobilization results were obtained for the highest dose of nZVI (10%).

Nanotechnology is a useful field for coping with highly contaminated sites either they are marine or landfills. Its unbalanced amounts can harm the ecofriendly environment as well. We hope in future to avoid the engineered nanoparticles hazardous to ecosystem by altering and degradating them with help of nano remediation, bioremediation and nanotechnology as well.


About Author / Additional Info:
I am currently pursuing BS in Biotechnology from International Islamic University Islamabad.