The term ‘nanotechnology’ was introduced in 1974 by Japanese scientist Norio Taniguchi but the original concept behind this massively developed field of science was introduced by Richard Feymman in his 1959 speech titled “There’s Plenty of Room at the Bottom.” Since its initial introduction into the world, the application of nanotechnology has found an ability to revolutionize and improve almost every technology of world today. The National Nanotechnology Initiative defines nanomaterials as those with dimensions of 1-100 nm. Due to their unique properties, nanomaterials have found their way into many everyday consumer products. Products based on nanotechnology are already manufactured in the field of electronics, pharmaceutical industry, food associated industries, agriculture, consumer products The widespread application of nanomaterials has inevitably led to their release into the environment, which raises concern about their potential adverse effects on the ecosystems and their impact on health. The measurement and characterization of nanoparticles is therefore critical to all aspects of nanotechnology. Complete characterization of nanomaterials is important for interpreting the results of toxicological and human health studies. Metal-containing nanoparticles are particularly significant class because their use in consumer and industrial applications makes them the fastest growing category of NPs. Hence, innovative analytical approaches are essential for monitoring the presence of nanomaterials in environmental and biological media, assessing their potential impact and supporting regulations.

Many analytical techniques are available for nanometrology, only some of which can be successfully applied to environmental health studies. Methods for detecting, quantifying and characterizing these materials in complex matrices are critical for the eventual understanding of their implications to environmental quality and human health. Methods for assessing particle size distribution include electron microscopy, chromatography, laser-light scattering, ultrafiltration and field-flow fractionation. Common approaches used to characterize nanomaterials include optical properties methods e.g. dynamic light scattering (DLS) and microscopy based methods e.g. transmission electron microscopy (TEM). One more technique that is proving invaluable for detecting and sizing metallic nanoparticles is single-particle-Inductively coupled mass-spectrometry (SP-ICP-MS) as shown in figure 1. 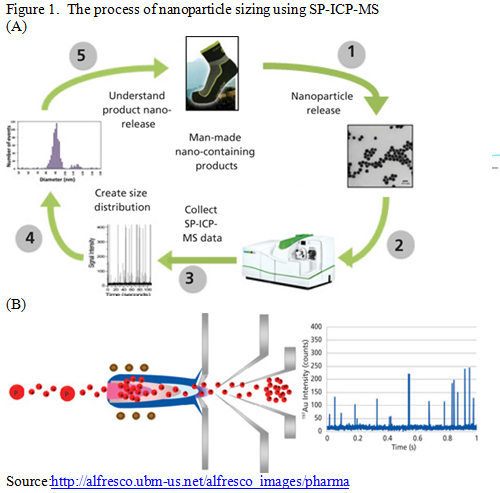 Its combination of elemental specificity, sizing resolution and unmated sensitivity makes it extremely applicable for the characterization of nanoparticles which have been integrated into larger products such as foods, consumer goods, personal care products, and pharmaceuticals. Generally, SP-ICP-MS is used to characterize populations of nanoparticles suspended in aqueous solutions. SP-ICP-MS takes advantage of the well-established elemental techniques of ICP-MS but performing measurements on ‘particle by particle’ basis as shown in figures 1 (B) and 2. Single particle analysis using ICP optical emission spectrometry was first reported in 1986. This technique was initially adopted for analysis of aerosol and airborne particles. Subsequently, this methodology was implemented for study of colloidal and microparticle suspensions.

Figure 2. Measurement of nanoparticle under the single particle mode of SP-ICP-MS
Source : https://www.agilent.com/en/newsletters/accessagilent/2013/sep/nanoparticles

SP-ICP-MS is an emergent ICP-MS method for detecting, characterizing and quantifying nanomaterials. This can be considered one of the innovative and emerging analytical approaches to provide information about the elemental chemical composition of noncarbon nanomaterials as well as their number concentration, size and number size distribution. Its combination of elemental specificity, sizing resolution, and unmatched sensitivity makes it extremely applicable for the characterization of nanoparticles containing elements such as titanium, gold, silver, silicon, which have been integrated into larger products such as foods, consumer goods, personal care products and pharmaceuticals.

A strength of SP-ICP-MS is that no instrument modifications is required i.e. it can be performed using off-the-shelf ICP-MS. But, as the development in SP-ICP-MS techniques is taking place, additional or uncommon instrument capabilities such as very short detector dwell times in the range of microseconds, automated data reduction software and hyphenation with front-end separation techniques (field-flow fractionation) are being viewed as necessary improvements by the instrument manufactures. Second important strength is its excellent detection capability in terms of nanoparticle number or mass concentration. However, there are some demerits of SP-ICP-MS also. For example, the technique can measure only one or at most two, isotopes in a single analysis using quadrapole instruments, the most common type of ICP-MS instrument. The detection power in terms of nanoparticle size is still somewhat lacking, with typical limits of detection ranging from 10 nm to 20 nm (spherical diameter) for monoisotopic NPs. Samples must be prepared or altered in such way to be compatible with ICP-MS sample introduction system. While considerable progress and much advancement have been made, the SP-ICP-MS is still best considered an emerging technique in understanding the environmental, health and safety implications of nanoparticles.

About Author / Additional Info:
A Researcher with Ph.D. in Molecular Biology and Biotechnology