Abstract: With the advancement of technologies, they are paving their ways to different aspects of biological science. Day by day occurring new inventions making the science easy to handle with more positive results. Nanotechnology is one such science that deals with manipulated behaviour of particles at nanoscale level. This altered behaviour at atomic level can be used enhance the experimental results. Plant genetic conservation is being handled in combination with tissue culture has the huge problem of microbial contamination. How it can be reduced using nanoparticle application is quite interesting as the particles have no visibility however their impact is largely visible. Apart from being used for disinfection, nanoparticles are being actively used in different plant tissue culture experimentation such as micropropagtion, cell transformation, secondary metabolite production etc. As one deals with the invisible atomic scale particles, it is required that their use must be investigated for their counter effects also.

Nanotechnology is one of the well-known area of science which is paving way into each and every aspect of technologies of recent era. Richard Feynman was the first visionary to introduce the nano-era to the world. In his talk “There's Plenty of Room at the Bottom” he laid the foundation of conceptual foundation of the field called “Nanotechnology”. When we deal with things on the scale of atoms and molecules we come across nanotechnology. A nanometre is one-billionth of a metre: ten times the diameter of a hydrogen atom. Things behave differently at nanoscale and this can be modified and used for the benefit of science. Today's nanotechnology harnesses progress in chemistry, physics, materials science and biotechnology to create novel materials that have unique properties because their structures are determined on the nanometre scale. The field of agriculture is also much influenced with the noteworthy application of nanomaterials. Some of the usage of nanomaterials in agriculture have been done for enhanced seed germination and plant growth and yield, enable plant genetic modification, improve bioactive compound production as well as to achieve plant protection from pathogens.With the advancement of technologies experts have attempted to imply nanomaterials in plant biotechnology too. One of its use exists in plant tissue culture which is the most recognised field for the germplasm conservation. Plant genetic resources are of prime importance to the scientists dealing with plants, especially to plant breeders and plant biotechnologists as nature has hidden variability stored in the untapped rare germplasm. Many efforts are made to explore, evaluate and conserve this variability which is present in rare and unique germplasm. Some of these germplasms are highly adapted to a particular environment and cannot be perpetuated outside their natural habitat. In such circumstances, germplasm can be conserved through ex situ means of conservation e.g. through tissue culture, one of the popular methods to conserve and propagate the plant tissues and organs in artificial environment. In one of the major steps while initiating the culturing of germplasm tissue is to disinfect any kind of contamination. Because the growth of microorganism is faster than the explant in the medium, it is a must that the explant being used, the culture medium, the containers and all the equipment used are free from any kind of contamination. Calcium hypochlorite, sodium hypochlorite, hydrogen peroxide, ethyl alcohol, silver nitrate, mercuric chloride are some of the frequently used sterilising agents in plant tissue culture. However, these agents also have their negative impact also on the explant sometimes causing phytotoxicity, thereby making the tissue culture process tedious. For prevention and removal of bacterial contamination antibiotics are used that may also cause toxicity in plant tissues of some species and inefficient to remove indigenous infection of plant cell. Experts have shown that metal and metal based nanoparticles can be successfully used to deal such problems. Silver based nanoparticles are reported to be first used to eliminate bacterial infestation in plant tissue culture. Nano-particles in particular have demonstrated broad-spectrum antibacterial properties against both Gram-positive and Gram-negative bacteria. Moreover there is a strong evidence that nanoparticles effectively prevent microbial drug resistance in certain cases because of this advantage nanoparticles are being considered as an alternative to antibiotics.Nano-silver particles, copper oxide, iron oxide, aluminium oxide, gold, nickel, magnesium oxide, titanium dioxide, silicon are being frequently used nowadays for different purposes in plant tissue culture apart from their use as disinfecting agents. Fig 1 shows the potential use of nanomaterials in different plant tissue culture activities and table 1 shows the possible nanoparticles that can be used to serve different purposes of plant tissue culture.

Though nanotechnology holds a great potential to be successfully used in combination with plant-biotechnology, its negative aspects cannot be neglected. For this a parallel analysis need to be executed for seeing its side effects on plant tissues. Nanotoxicology has been evolved with nanotechnology which aims at studying the undesired impact of using nanoparticles in various biological studies. Scientists use the term “Nano pollution” to refer unseen hazard that may be caused by invisible nanoparticles and have impact on environment, human and plant health. Thus to have positive result a more targeted and concise study is required to assure a healthy use of this emerging field. 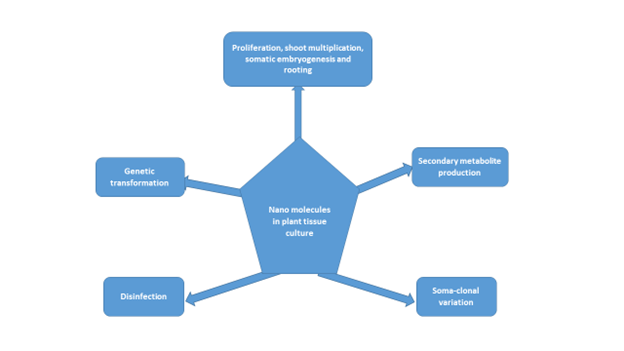