Abiotic stress and its types

The biosynthesis of common Pas can be divided in to two main steps: 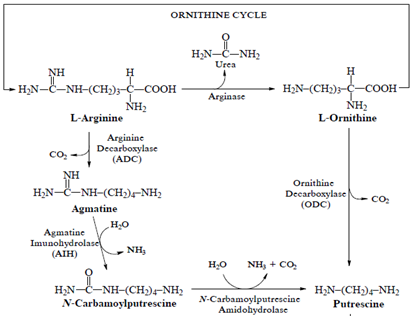 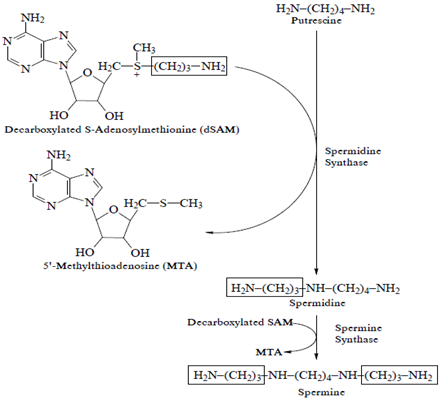 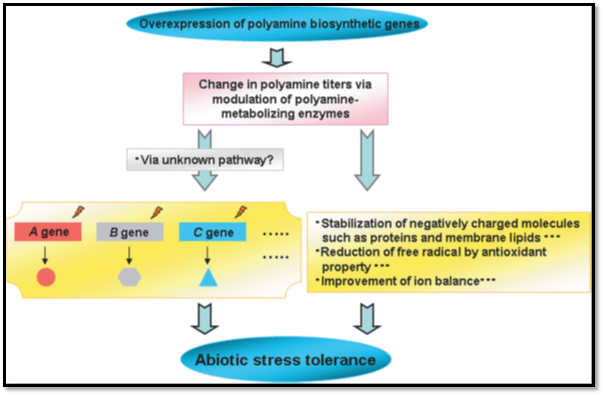 PAs include electrostatic binding to macromolecules. PAs interact with ion channels and receptors, resulting in regulation of Na+, K+ and Ca+2 homeostasis. Production of H2O2 (Hydrogen peroxide) upon polyamine catabolism helps in the induction of abscisic acid. Putrescine is an efficient stimulator of ATP synthesis and causes depolarization of membranes. Spermidine and spermine also prevent leakage of amino acids and electrolytes. PAs are reversing stress induced damages in photosynthetic apparatus and help in photosynthesis.

Legocka and Kluk (2005) have reported the effect of NaCl (260mM) and sorbitol (360mM) on changes in polyamine content and ADC activity in Lupinus luteus seedlings. After exposing the plants to NaCl and sorbitol for 4 h, concentration of total polyamines increased. But when plants were exposed for 24 h, the level of free Put decreased in roots and cotyledons, and increased in hypocotyls and leaves. The level of free Spd also decreased in roots, in contrast to the increase of Spd observed in hypocotyls and leaves. In the presence of NaCl and/or sorbitol, the activity of ADC in roots increased by about 66% and 80%, respectively that indicates the translocation of polyamines from roots to leaves. Yamaguchi et al. (2006) studied that the polyamine Spm protects against high salt stress in Arabidopsis thaliana wild type and double knockout mutant plant (acl5/spms). The mutant showed higher sensitivity to high salt than wild type plants. This phenotype was cured by exogenous spermine but not by any other polyamines putrescine and spermidine, which suggesting a strong link between spermine deficiency and NaCl hypersensitivity.

Conclusion
Abiotic stress condition increases the levels of free and conjugated polyamines. Polyamineshelp in scavenging the free radicals and induce activity of antioxidant enzymes. Polyamines help in osmotic adjustment and also in maintaining ionic balance. Salt stress increase the activity of DAO in salt susceptible plant .Induction of abscisic acid during various abiotic stress cause the over expression of polyamine synthesis genes like ADC2, SPDS1, SPMS. Transgenic plants having over expression of polyaminessynthesis genes can gives more resistance to different abiotic stresses compare to wild type.