Nitrogen is the most limiting nutrient for crop production. Nitrogen is an essential macronutrient in various components including amino acids, proteins, nucleic acids, chlorophyll, and some plant hormones. As nitrogen strongly influences crop productivity, a vast amount of chemical nitrogen fertilizers is used to maximize the production of cereals. Efficient use of nitrogen is important for sustainable crop production. Nitrogen use efficiency (NUE) is the fraction of applied nitrogen that is absorbed and used by the plant. Crop response to applied N and use efficiency are important for significant crop yield. Low recovery of nitrogen (< 50%) is associated with its loss by denitrification, volatilization, leaching, surface runoff and plant canopy (Socolow RH, 1999). Propensity of nitrogen for loss from soil‐plant systems makes more challenging environment for its efficient management. It is necessary to increase N use efficiency (NUE) of crop plants to improve yield. This may also reduce cost of production and helps in maintaining environmental quality.

It has been reported that AP2/ERF family members play significant role in nitrogen starvation response or nitrogen utilizing efficiency (NUE) and plant response towards various environmental stress factors. NUE depends upon nitrogen uptake efficiency of crop plants (ability to uptake nitrogen from the soil) and efficient use of this absorbed nitrogen by the plant for significant growth and production (Bi YM et al., 2009). However, these efficiencies may vary from crop to crop. The variation may occur within the same crop due to several factors such as different organs, their mechanisms and environmental factors. NUE is an important parameter that strongly influences the productivity of crops. It is necessary to identify nitrogen deficient-induced genes involved in signal transduction pathway of nitrogen utilization. This may improve the plant nitrogen use efficiency (NUE) for sustainable agricultural practices to diminish the use of chemical nitrogen fertilizers. 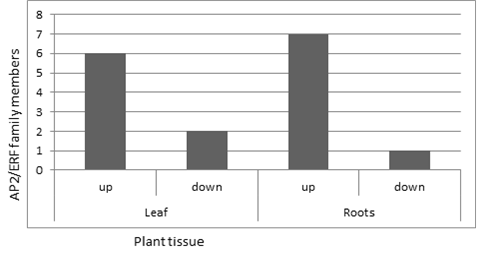 Conclusion
Nitrogen responsive candidate genes may be used to induce high nitrogen utilizing efficiency in cereals. In future, these genes may reduce use of chemical fertilizer as a huge source of nitrogen to maintain environment sustainability and soil fertilizer.