Biomagnification of Nanoparticles and its implications on Soil and Plants

This article is based on the research carried out at Department of Biosciences and Chemistry, Sheffield Hallam University, England, Great Britain...
Biomagnification of Nanoparticles and its implications on Soil and Plants
Author: PARIMAL RAMESH UDGAVE

In present status, Nanotechnology is the Miracle of science which is in the initial stage of development. Undoubtedly, it can solve a variety of problems from chemistry to biology. Nanotechnology can be applied to Agriculture, Food technology, Pharmaceutical industry, biomedicine, and even other fields. There is the reason why we focus on Nanotechnology in Agriculture. Agriculture is the backbone of more than half of world and it directly affects living and daily life. Shortage of food could be lethal if there will be a shortage of food.

There will be two situations which will be the result of nanotechnology use. Firstly, it will be used. Secondly, it will destroy the purity of biological molecules by forming a complex or acting upon them. The soil is very important and the basic need of human population for survival on the planet. We cannot replace it. Soil formation process takes millions of years. Identified forms of soil destruction are soil erosion, physical, chemical and biological destruction, salinization and pollution. Soil erosion is the primary reason for its destruction. In the present world, the most important factor to affect soil quality is toxicity. Toxicity from chemicals, heavy metals, and specifically nanoparticles. There are some agrochemical and pesticide companies which are trying to spread Nano-based fertilizers and nutrients. Farmers and commercial growers should clarify the process for nanoparticle synthesis. A nanoparticle can be synthesized by different processes. Conventionally, Chemical synthesis is a popular one. Use of chemicals like DMSO can burn out the soil nutrients and soil microbiota. In initial days of nanoparticles, there will be no problems. Biomagnification process will take place years after years and will make soil with chemicals and toxic materials. On another side, green synthesis of nanoparticles is an eco-friendly method. However, bio-constituents in plant extracts can act against (Antibiotic, Anti-bacterial, Anti-fungal) soil microbiota and change or decrease the soil fertility and might result in a barren land.

The data obtained from ICP-OES also matched with the hypothesis suggested by Khodakovskaya et al. 2009 indicated in Figure No. 1 According to the report, nanoparticles firstly observed by root tip, root hair and then it will be transported to stem aerial branches and leaves. All the concentrations divided under Table No. 1, indicate that the higher silver on concentration was found in roots, and lower was observed in shoot and leaves. The seeds indicated silver content in seeds with the highest concentration in roots, low in the shoot and lowest in leaves (roots> shoots >leaves). In Figure 1, the route of nanoparticles is indicated. 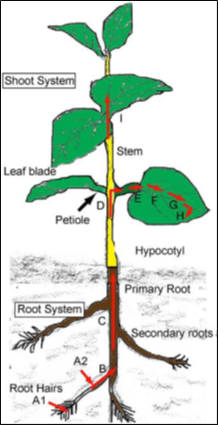 Figure No. 1 Route of nanoparticles in Plant system

How to control Soil toxicity from nanoparticles?


About Author / Additional Info:
I am working as Asst. professor. My scientific interests include Nano-biotechnology, Soil toxicology, Eco-toxicology and Environmental science.